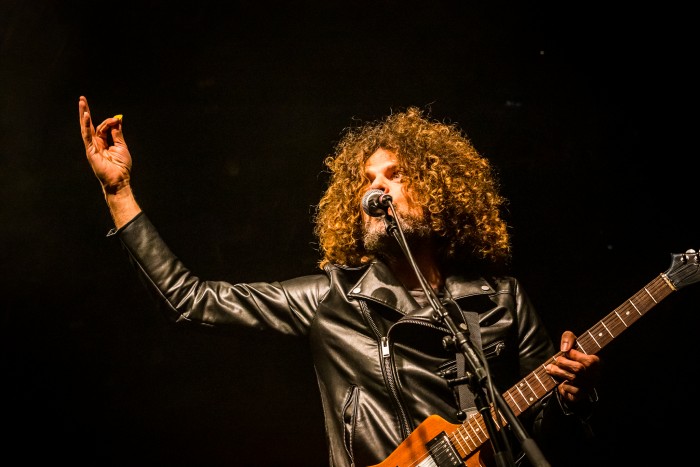 Andrew Stockdale is a rare beast. An indelible icon of the Slash, Ozzy or Elvis ilk, not easily forgotten. Paradoxically, Andrew is as at home making small-talk with small-town cashiers as he is commandeering a crowd 10,000 strong. As inquisitive as he is knowing, the Grammy Award winning musician still finds new inspiration in some of his earliest musical influences.

With his insight into the human condition and the idea of becoming the traveller. I always remember that he befriended Woody Guthrie just before he passed and swore an allegiance to write, record, travel, and play everywhere, and the understanding that everything grows from guitar and lyrics. Everything is shaped around that. I guess this is my core value in terms of my approach.

I met Bob Dylan’s son just after we recorded the second (Wolfmother) record Cosmic Egg, he was saying that

"Bob Dylan’s grandson wanted to be a rapper, and Dylan was all for it"

I guess he understands the concept of lyrics and music being the driving force.

I grew up on Sgt Peppers, John Lennon’s 'Best Of' record and Abby Road. It’s all concepts that the writer is pitching to the listener, Imagine, I Am the Walrus, Working Class Hero.

I heard Bowie asked Lennon, ''What is RocknRoll''? His response was, ''A back beat and the truth''. The idea of truth in an expression is dubious, though I get what he means. Maybe Lucy In The Sky With Diamonds is the truth to him, his own truth so to speak. I guess with Lennon it’s like the folly of life was always omnipresent, everything could change, and moments are fleeting, and it’s best to see it with a degree of humour! I’ve always carried this spirit with me before every show and every tour, in the sense that this is really important and it isn’t at the same time. Another quote (of Lennon's) was:

"We take the art of not taking ourselves seriously very seriously."

This mostly wood nightclub staple on Santa Monica Blvd, when it first opened was famous for breaking many singer-songwriters and folk singers…now known as the Laurel Canyon sound. The sound in the Troub is epic and The Monday night “Hoot Nights” gave birth to Joni Mitchell, Neil Young, The Eagles. Elton John debuted in America there. In the 80’s it was common to catch Wasp, Guns N’ Roses, Motley Crue. I also worked a deal with Eddie (the owner after Weston) to pay Poison’s rent and phone bill every month in lue of them doing a show a month. One of my favorite nights there, was when I made a record with June Carter Cash she played the Troubadour…it was magic! I entertained BRMC backstage just when they were playing their first gigs. It was also where Janis Joplin partied the night before she was found dead in her hotel room.

It’s pretty obvious what I’ve taken from these guys. If anything it’s structure. Forget about all the intricate frilly stuff and remember the power of the power chord. This is how you drive a band, forget about strumming chords, forget about mid tempo stuff, it’s all up-tempo, riff driven power chord type stuff.

Beneath this essentially you could say is Bill Ward's Jazz drumming. It’s not in the beat, it’s always a little behind, there’s embellishments, phrasings, colour, nothings straight forward. It's fuelled by sophistication and feel.

Ozzy's approach for the most part is 'question & answer' type blues vocal melodies. I’d say it’s like 'here’s the question', 'here’s the answer' and 'here’s the release'. War Pigs would be the ultimate example of this, and The Wizard, and plenty of others, there’s always a balance to his approach. Sabbath are a lesson in how to drive a band. If you have bass guitar, drums and vocals, Sabbath will show how to create space and groove and lift everyone up into something bigger than the parts.

I’d say back in the 2000’s Jack White made me feel more at ease with my voice. Stuff melody, just get the words out and make it work, it’s not going to be pleasant, it’s a cathartic release.

Home recordings, making records quickly, using a simplified drummers approach, don’t crowd the song with over complication, create your own restrictions, celebrate your restrictions, and use them as a strength to work with.

"Get out of the generic setups and use vintage gear, vintage everything. Turn your back on the 'arena sound' and somehow end up in an arena at the same time."

Around the 2000’s Grunge was done, drop d tunings had runs their course, and no one knew which way to take RocknRoll, or if it was even worth it. The White Stripes freshened it up, turned it on its head and got the show in the road for many a guitar driven band. And two pieces! Forget the bass, just go raw and charge ahead.

I guess the stream of consciousness of Jim Morrison’s lyrical approach always spoke to me. In the sense of just writing whatever comes off the top of your mind, then thinking about it later. Write lyrics quickly without thought, I’ve written lyrics on the floor in a jam room and thought I’ll improve them later, and that never happens, then it ends up being (Wolfmother's) Dimension and a crowd of people are singing along. It strikes me as a cool thing that Morrison couldn't play a note on an instrument, yet he managed to inspire a band and create so much music. The lyrics, drive and imagery can really inspire a band, it’s the look and feel of songs that transport you into a creative headspace. Blood red sunset of fantastic LA always rings out to me.

"Every time I land in LA and drive up La Cienega Blvd I’m always hearing LA Woman in my mind."

The departure from pragmatic constraints and the other experimentation with higher consciousness has always appealed to me. I’m a believer in a great opening line to a song straight off the bat. 'Hello, I love you won’t you tell me your name?' I mean that sets the stage pretty quickly. There’s a respect for time and the listeners time with Jim Morrison, make your point and get it across quickly. There’s nothing like economy of words, though on the same hand if you want meandering musings, he’s got that up his sleeve too.