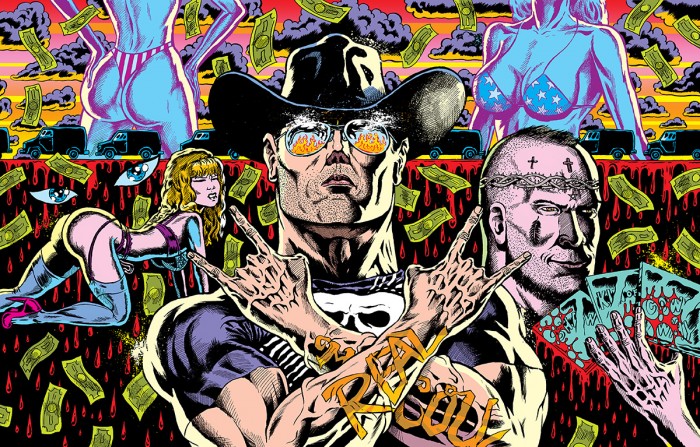 In modern comics, American illustrator, Benjamin Marra, almost stands in a league of his own. With a style that’s detailed and gritty, and storylines that subvert tales of the classics, the Grammy-nominated comic artist is somewhat of an auteur who’s not afraid to get a little weird. Earlier this year, Frankie’s Pizza collaborated with Marra to bring to life the outrageous concept of ‘Lemmy, Lager, and a Whole Lotta Lunacy,’ a comic strip inspired by the launch of Frankie’s collaborative beer project with Jack Daniels, Lemmy Lager!

Let’s start easy. How’d you get into comics?

At a very young age. I think my first comic was one my mom bought me. It was a magazine-size comic adaptation of Indiana Jones and the Temple of Doom. I was an avid fan of TinTin around the same time as well. Then I got into the black-and-white boom of the 80s spurred by the first iteration of Teenage Mutant Ninja Turtles. I was pretty hooked after all that.

What was the first comic you ever created?

I tried and failed at making comics when I was young. The first comic I ever created start to finish was a 10-page comic I made in art school. But the first, legit 22-page comic I made that I self-published was Night Business 1.

The daily strip on your Instagram is such a sick concept. The idea of a continuing story, posted everyday for the masses. Why did you choose to share this for free? What is it about the format of Instagram that appeals to you?

I was inspired by my friend Michael DeForge's daily comic Leaving Richard's Valley which he posted on IG a few years ago. I wanted to try my hand at a daily strip to see if I was up to the challenge. I also wanted to experiment with a looser, faster drawing style required by daily strips. I didn't really think about the fact that the comic would before free. Many webcomics are posted for free. I sort of see it as a way to promote my work. I do have a Patreon subscription where fans can read the next day's comic in advance. The IG format is actually surprisingly ideal for comic strips with the multiple-image post and swipe function.

You have an insane catalogue of work under your belt, from graphic novels to a Grammy nomination. Don’t take this the wrong way, but it’s slightly surprising for you to have such huge commercial success considering the content you work with. There’s sex, violence, gangs. What do you think it is about your stories that is so easy for people to connect with?

At the end of the day, I think the audience connects with the human element in my work. As much insanity as there is content-wise, I think there's another facet that is very relatable for people on an emotional level. Either it's the way I'm drawing, or it's the characters in my stories. I read somewhere that you’ve taken inspiration from pinball machine art.

I’m not sure if you know this, but at Frankie’s Pizza there is a killer collection of pinballs that cast a faint blue glow over the bar. If you could create a pinball machine, what would it look like? What would you call it?

Ha! Yeah I love pinball machine art. I guess if I were to create a pinball machine it would have to be some kind of narrative-based game, probably science fiction, probably psychedelic, probably a space opera story. I think I'd call it something generic like Star Adventure.

The concept for the Lemmy Lager comic is pretty rowdy. What’d you think when Frankie’s Pizza came to you to collaborate on this project?

I thought it was right up my alley! All of it appealed to me from top to bottom. Lemmy is definitely an inspiration to me. But I loved the concept you all came up with for the strip. It was fantastic. Truly captured Lemmy's spirit.

Now for the serious questions. Elvis or Elvira?

Extremely difficult. Elvis is very important to me, but I have to choose Elvira because of her importance in my sexual development growing up.

Damn! I love Motown. I love Detroit. But as a true metalhead I have to go with Megadeth. But it's not a happy decision.

Slayer. Santana is great. One of the first CDs I ever bought. But Slayer is Slayer so I have to go with Slayer.

Definitely Freddy. They're both iconic and I love the Friday the 13th films. Love them. Watch them every Halloween. But Freddy has so much personality and the first Nightmare is incredible.

Butthead. He's got all the best lines. 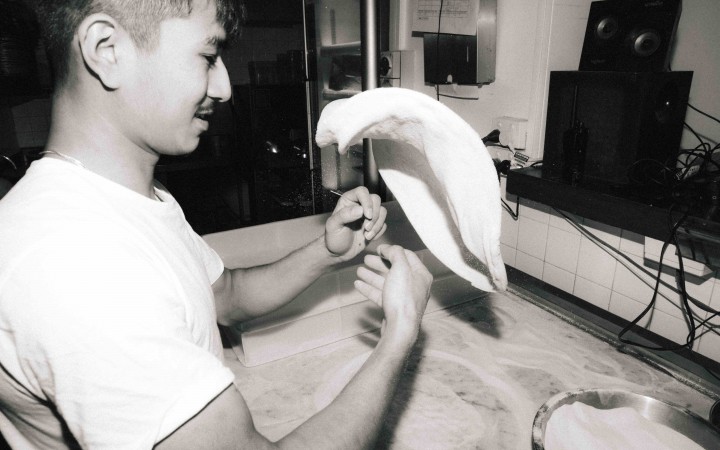